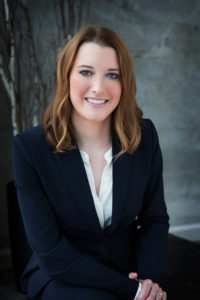 “I’ve seen people frustrated with the legal system struggling to get justice  but not knowing how. Divorce can cause financial and emotional stress  and I want to help families achieve a fair, amicable settlement.  I joined Bliss Law Group to help protect my clients’ well-being and their future.”

Rebekah A. Young joined Bliss Law Group in September 2020 after working at the Washington State Court of Appeals as a Judicial Law Clerk. Growing up in a military family, Bekah understands the stress deployment and military service can have on families. In high school and in college, Bekah joined the Moot Court team and began to understand how she could research the law and find an avenue to get justice for someone. Her Mock Trial experience gave her a taste of advocacy on behalf of others – and she liked it!

Bekah is a Washington native who graduated from Washington State University majoring in Political Science and playing volleyball. She later attended the University of California, Hastings Law School in San Francisco and graduated in 2019. During law school, Bekah received the Outstanding Award for Pro Bono Work for representing a client at the Tacoma Detention Center.

Bekah played sports during high school and in college and her competitive drive naturally led her to participate in Moot Court during law school. Bekah won numerous awards while participating on the Moot Court Team including coaching a National Championship winning team at the Wechsler Constitutional Law Competition. Her extensive advocacy during law school has carried over to her legal career. During law school, she clerked at a boutique firm dealing with issues of sexual harassment and discrimination in the workplace and her firm partnered with the #MeToo movement; she enjoyed helping women find their voice and get justice.

“I became a lawyer because I grew up wanting to fight for fairness, and help people who know something isn’t fair.”

Bekah’s sense of fairness and justice influences how she practices law. Instead of focusing on stirring up conflict and getting a WIN in court, Bekah works to reach an amicable resolution that’s fair and best for her client’s future whenever possible.

Bekah is married to a chiropractor and enjoys working out, being outdoors, and watching Survivor with her husband. Her hobbies include reading, gluten-free baking and becoming a grill master. Bekah is a dual citizen of Canada and the United States and was homeschooled until the 8th grade.

Bekah is a member of the New and Young Lawyers Association, the Tacoma Pierce County Bar Association Family Law Association and the Washington Women’s Lawyer Association.

"Fight for the things that you care about, but do it in a way that will lead others to join you."